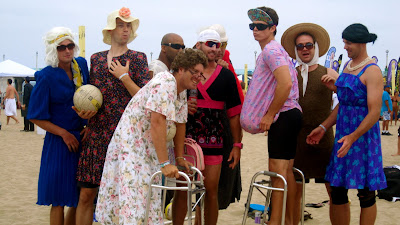 The Charlie Saikley Volleyball Tournament is one third Halloween, one third athletic competition and one third weekend-long party. Better known as "The 6 Man," it's an annual tournament that brings in crazy crowds of spectators and really talented volleyball players to the courts just south of Manhattan Beach's pier.
Part of a full weekend of South Bay's International Surf Festival events, the competition starts early Saturday morning. Alex and I headed out to witness the action from the start, and the games were well underway by the time we got to the courts around 930am. What a crazy sight - people dressed in theme with their team names dressed in kilts, as Golden Girls (above), wigs, tutus, capes...you name it.
At the very least, teams wore matching bathing suits or boardshorts. Some went all out - the WWE team had a portable wrestling ring that they would put up around their half of the court, and the Running of the Bulls team actually had a man dressed up in an inflated bull costume.
As someone who highly enjoys themed occasions (or as our friends across the oceans refer to it as "fancy dress"), Saturday was an amusing mix of sport and costume brainstorming. Looking forward to what the teams come up with next year! 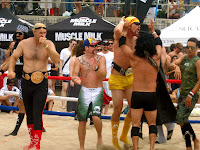 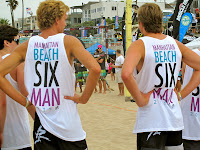