Hands down, my favorite place within walking distance from my apartment has become Show at Barre. I was severely disappointed when the John Hughes edition of For the Record we had bought tickets for was canceled - but that did not stop us from checking out the Coen Brothers edition, which is running for the next few months. 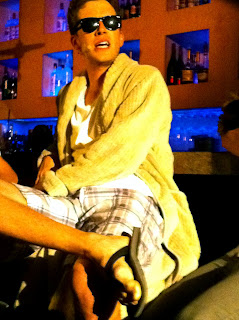 For those unfamiliar with the setup, Vermont, Rockwell and Show at Barre are all owned by the 1714 group. Kyle and I met there early for a round of sangria, kobe sliders, hot & skinny fries and grilled cheese with charred tomato bisque, after which we were sufficiently energized for the show.

We transitioned over to Show at Barre, which is the cabaret-style bar area adjacent to Vermont and were promptly seated at a tiny table amidst more tiny tables and booths facing the stage whose backdrop is Vermont Street. Additional patrons started filling up every nook and cranny of the venue - the place was packed for opening night.

I don't want to give too much away for those looking to check out the show, but I will say that it ran a great gamut of songs and acts from the Coen Brothers movies - O Brother Where Art Thou?, Fargo, The Big Lebowski, True Grit, etc. One of the best parts is how the show isn't contained to the stage. The cast utilized every possible open space amongst the audience, really engaging us into the performance. We were truly hooked, from the opening to the closing. 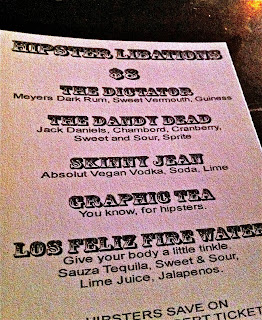 Naturally, we made plans to snag tickets to the monthly Hip Hipsteret which was scheduled for the following Wednesday. Once again, we were blown away. The larger ensemble covered music from Adele, Florence + the Machine, LCD Soundsystem and more - weaving it into an original cabaret performance.

As with the other shows, there was a two drink minimum, but the bar also provided a special selection in theme with the night's performance. They also allow patrons to order from a full menu of appetizer, entree and dessert items as well which is great - we can vouch for the skillet baked chocolate chip cookie and molten chocolate cake.

I cannot give enough kudos to the team that coordinate all of the various performances not to mention the culinary team behind the 1714 establishments, so you'll just have to go and plan an outing yourself to one of the shows. I know we already are scouting out the upcoming schedule for the new additions and the menu for our tastebuds' appeasing...see you there! 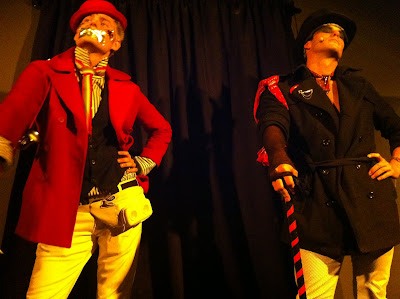